According to Wikipedia, American football has been in the Philippines since 2001. In 2014, the first national tackle football team, called Philippine Aguilas, was formed. The Philippine American Football League, established in 2016, has now 7 competitive teams. This sport is held at the largest football stadium in the country located at Bocaue Bulacan. 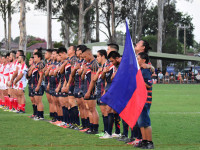